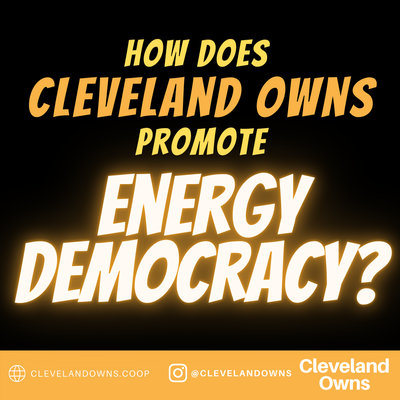 “Energy democracy is a way to frame the struggle of working people, low-income communities, and communities of color, and their allies, to take control of energy resources and decision-making from the corporate energy establishment and use those resources to empower their communities.

“It means a decentralized energy system, one characterized by social and community-based control and ownership of energy resources, a shared resource developed in harmony with the Earth ecosystems. Democratizing energy is a central aspect of just transition from a fossil-fuel economy to a new renewable energy economy grounded in economic and social justice.”

Energy democracy is part of a broader vision for a society transformed through a just transition away from extraction and towards regeneration. We’re deeply grateful for the work of Climate Justice Alliance and Movement Generation who’ve led on this vision for years. You can learn more about their work on a just transition here.

What does Cleveland Owns do through its Energy Democracy Initiative?


More about the Energy Decmoracy Initiative